Your password security requirements are retarded. Apparently, my new password, that you literally forced me to pick, is half the length of the original password. It's somehow more secure because it contains punctuation (with an attacker not knowing that or not, they would be forced to try punctuation, numbers, etc, just because it was possible), but seriously, there was no way in hell my previous password would be guessed by an automated system or human being. It was a strung together sentence. 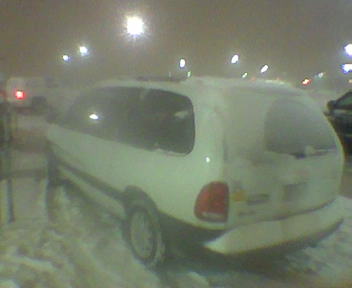 Winter can bite me.

[rant]
The next time I hear someone use the term "Web 2.0", I'm going to go on a merciless rampage of blood and gore.

See how stupid version numbers look like on other things?

The only remaining obstacle in putting the torture ban into law is the White House. The Vice President has already threatened an administration veto on the torture ban unless the CIA receives an exemption. This is unacceptable. We need to act now and show the White House that torture is not an American value and should never be the policy of the United States.

VICE PRESIDENT Cheney is aggressively pursuing an initiative that may be unprecedented for an elected official of the executive branch: He is proposing that Congress legally authorize human rights abuses by Americans. "Cruel, inhuman and degrading" treatment of prisoners is banned by an international treaty negotiated by the Reagan administration and ratified by the United States. The State Department annually issues a report criticizing other governments for violating it. Now Mr. Cheney is asking Congress to approve legal language that would allow the CIA to commit such abuses against foreign prisoners it is holding abroad. In other words, this vice president has become an open advocate of torture.

WASHINGTON – Vice President
Dick Cheney made an unusual personal appeal to Republican senators this week to allow
CIA exemptions to a proposed ban on the torture of terror suspects in U.S. custody, according to participants in a closed-door session.

Now, I've been told that it doesn't matter if we make it illegal here, the CIA will do whatever it wants anyway. Apparently, it matters a lot to Dick Cheney. If so, it means that it must have some actual level of pull. I don't even begin to pretend it will stop torture entirely, but when you turn on the lights, the roaches scatter. Some of them find hiding places, but you can kill a few of them, and it calls attention to the roach problem, rather than letting it take over and multiply and pretend it doesn't exist.

I'll leave you with a quote from a person I'm beginning to respect more and more with each coming day.

I want to emphasize to some of my friends who say that we should do anything that is necessary to extract intelligence, No. 1, torture doesn't work; No. 2, if extraneous or extraordinary actions have to be taken–and there may be cases, and we will get into this in the next amendment, where someone has information that it is believed poses an immediate threat to the United States–then I would suppose that it would be entirely appropriate, under law, that the President of the United States could make that judgment and take whatever actions are necessary. In the meantime, the Army Field Manual authorizes interrogation techniques that are proven effective in extracting lifesaving information from the most hardened prisoners. It also recognizes that torture and cruel treatment are ineffective methods because they induce prisoners to say what their interrogators want to hear, even if it is not true.

It is consistent with our laws and, most importantly, our values. Our values are different from those of our enemies. When colleagues or others may come on this floor and say: Well, they do it, others do it, al-Qaida does it, other nations in the world do it, what differentiates us, the United States of America, from other countries is the fact that we do not. We do not abuse human rights. We do not do it. I would argue the pictures, terrible pictures from Abu Ghraib, harmed us–not only in the Arab world, which is an area of great concern but it also harmed us dramatically amongst friendly nations, the Europeans, many of our allies.